Initially Lui was engaged to

Initially Lui was engaged to

Initially Lui was engaged to revamp my bathroom, He forwarded suggestions for the design of a modern fitment. Work began with the stripping of the room. He kept me informed of the time table for the works to completion. During this period, I expressed that I would like the en-suit to be done in the future. So it was that Lui and his son combined to refit both rooms together.
The works were carried out in a professional and efficient manner. I was informed regularly about the progress and how the work needed to be carried out. The standard of work and finish is very high, with Lui being a perfectionist. Family expressed this on a visit after completion. Lui also advised on changes, such as removal of a 100mm cavity wall to allow the shower tray to be increased in size in the en-suit. He also advised on alternative fitment in order to reduce cost. I appreciated this, but proceeded as agreed. Communication was excellent.
The work proceeded quickly and efficiently with cleaning taking place as and where necessary. Lui on a few occasions had to be left in the house and lock up, as I needed to attend hospital on a daily basis. I had no worries about his care respect for my property.
On completion of the work, Lui demonstrated all the facets of the installations, and ensured that I was satisfied with the 2 rooms.
I am truly delighted with the end results, these far exceeded my expectations. I have a modern fitted bathroom, and en-suit shower room to a very high standard, which far exceeds that which had been replaced. I would have no hesitation to recommend Lui to friends and neighbours who are thinking of having similar work carried out.
Alf Lansdowne 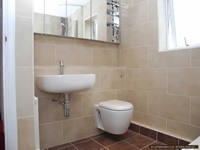 I recently had Lui refurbish my Bathroom and En-suit. Just before he was due to start work, my conventional Heating and hot water system gave up. Although fixed, I requested a quote from British Gas for a combi system. The Surveyor came part way through the bathroom refurbishment. The suggestion was that the combi boiler… Read more “Combi sealed system”