Lui and his son have just finished work in our home, comprising of replacing fittings and shower in the main family bathroom, replacing an old boiler with a new combi boiler which entailed removing storage tank from the loft and a hot water tank from the airing cupboard and completely stripping out and refitting our en-suite bathroom.

Lui told us the work would take a month to complete; they started on the 9th January and finished on the 9th February.

They turned up for work on time and always did a full day; we even gave him a key so he could let himself in whether we were here or not. Lui works as if he is working on his own home, and the standard of finish reflects this. He offers advice and will not cut corners even if it makes the job take longer.

If you want a cheap, fast job doing then don’t use Lui the Plumber, but if you want a first class job with a high quality finish, then Lui is your man.

We would have no problem recommending Lui The Plumber, and will be using him again on any future home improvements we may have. 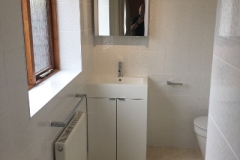 Last December Lui replaced the kitchen sink/taps and repaired some hidden/unexpected damages (due to years of leaking) in the kitchen cabinet. During that time, I realised he is truly exceptional and very reliable plumber with high standards. Nowadays, it is extremely difficult to find a professional plumber who you can trust can do a high… Read more “Lui the Plumber”