When I considered refurbishing my bathroom, the main issue was ‘WHO’ to trust to do a professional job?

I had three recommendations, but Lui was the only one who understood what I wanted and was able to guide my choice to achieve this, without unnecessary expense. His experience and knowledge was exceptional and I had no hesitation giving him the job.

Realistically what I wanted would have taken me beyond my budget, so Lui was able to advise the best possible options. His knowledge of products available and solutions to my ideas streamlined the whole process, right down to the last detail.

The results are even better that I had imagined. Even where the old shower fixings made holes in the tiles became invisible under Lui’s expert and immaculate finish! The standard of Lui’s skills are so exceptional, not only would I recommend him for any home improvements or problem solving, I would say you’re lucky to have found the best there is – Lui The Plumber!

I am delighted to give my highest recommendation. Thank you so much Lui. 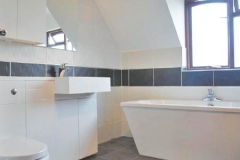 We are delighted with the

We are delighted with the care and skill given by Lui when we decided to re-furbish our bathroom. We are very happy with the finished room which is to a very high standard and would be happy to recommend this company to everyone. Regards Sue.